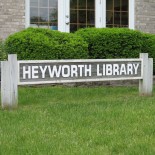 We Are So Much Larger Than Our Walls questions@heyworthlibrary.com

A dozen people braved the cold for the Business Breakfast Open House hosted by The Heyworth Public Library last Friday, January 24, 2014.  It was a very casual setting and it offered community business members the opportunity to stay connected.  Manager Dave Hoegger and John Wyss of Bassett’s Mechanical, Inc.were in attendance and it was announced that the company will soon be opening a new office on Main Street in Heyworth.  The business handles heating, air conditioning, plumbing, electrical, geo-thermal, automatic standby generators, wind and solar.

This entry was posted on January 30, 2014 by Heyworth Public Library District.