We Are So Much Larger Than Our Walls questions@heyworthlibrary.com

The Little Free Library was built in memory of Vivian Mouser.  Vivian joined the Heyworth Public Library in June 1966 and was appointed Director in February 1967.  She retired as Director in June 1993, but continued to work at the library until June 2000.

A Little Free Library is a free book sharing box where anyone can take a book or leave a book to share with someone.  You do not need to leave a book in order to take a book.

The Heyworth Public Library Trustees would like to recognize the generous donations received in Vivian’s memory that made this project possible.  We would also like to thank Brian Aho and the Village of Heyworth employees, especially Robbie, Scott and Joe, for helping with the installation and Tom Pickett for his work on the Little Free Library and memorial sign. 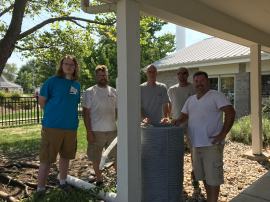 Vernon Dickey of Heyworth BSA troop 931 installed his Eagle Project at the Heyworth Public Library on August 19. He and eleven of his fellow scouts, scout leaders, siblings, and Heyworth High School Key Club members installed two rain barrels and did landscaping clean up work. This project was funded by the family of Marilyn Butler in her memory. Marilyn was a longtime board member of the library and enjoyed gardening. She donated landscaping plants to the library every year prior to her death. The rain barrels will be an asset in keeping the flowers watered during the summer months. Thank you to the Butler Family and to Vernon Dickey and friends for making this project happen in our community. The staff and board of the Heyworth Public Library District thank you!

Heyworth Public Library received over 50 cake pans from the family of Leta Shankel. We are thrilled to be able to offer cake pans for a free 7 day checkout to our community. Thank you Shankel family for sharing your mother’s memory with the Heyworth Library.

The Heyworth Board of Trustees commissioned Heyworth resident, Larry Carl, to make and install a book shelf in the Community Room in memory of longtime patron and library trustee, RoBerta Thomas.  Mr. Carl generously gave his time to this project and the library purchased his supplies.  A plaque was installed recognizing Thomas’ 38 years serving on the board.  She was the secretary for most of these years and was known to write the minutes in verse during the early years of the library. Her sense of humor and passion for public libraries will be remembered for future generations.

Watercolor Class - Monday, July 19, 6:30 p.m.
Celebrate #earthday2021 at the library with a book and an earth windsock! #librarydisplays #librariesofinstagram #books #takeandmake #heyworthlibrary #read #celebrate
Adult make and takes are ready to go! This month we introduce you to macrame with a simple keychain. We would love to see your finished projects so please tag us ! #morethanbooks #publiclibrary #heyworthlibrary #stringart #macrame #wehaveabookforthat #read
Celebrate #womenshistorymonth with a book about women or by women! Who is your favorite female role model? #bookstagram #librariesofinstagram #publiclibraries #nonfiction #biography #memoir #read #heyworthlibrary #bookstogethertuesday
Happy birthday #drseuss! Stop by and pick up a fun activity bag of Dr. Seuss related crafts and activities! Also catch a new favorite or even an old favorite #drseuss book! #readersofinstagram #craftkitsforkids #readacrossamerica #publiclibraries #onefishtwofish #heyworthlibrary #whattoreadtoyourkids
Loading Comments...